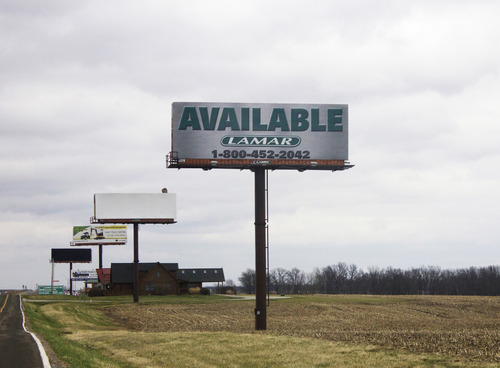 Like the motels and fast-food joints along America’s interstate system, billboards are a ubiquitous roadside feature, a revealing (if archaic) format that refuses to disappear in a digital age. In Missouri, where there is a billboard surplus, these low-budget advertisements can seem like a back-and-forth shouting match in the culture wars, with their commentaries on sex, gambling, firearms, unions, and religion.

The “I-70 Sign Show” is a yearlong event launched in April that engages the Missouri landscape by exhibiting art on an interstate billboard near Columbia, halfway between St. Louis and Kansas City. Six artists are on the main board for two months; then their work rotates to an available board elsewhere on the interstate for another two months, a different location each time. I talked with “Sign Show” organizer Anne Thompson, an artist and writer living in Columbia, about her curatorial agenda.

Read the Q&A on the Believer Logger